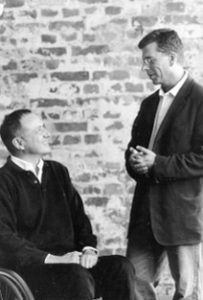 About the Spinalis Foundation

The history of Spinalis began in 1984, when Claes Hultling dived into the water, hit a rock and broke his neck. He became paralyzed from his chest down. At the time of the accident he was working as an anesthesiologist at Karolinska Hospital. He found it difficult to work as an anesthesiologist with a broken neck and at the same time his services and life experiance were in demand to assist others who had suffered a spinal cord injury. Therefore Claes Hultling decided to devote his life to rehabilitate people with spinal cord injury.

Along with his colleague and friend the neurologist Richard Levi and Claes Hultling went to USA and Australia to work and learn more about taking care of people with spinal cord injuries. They came home filled with enthusiasm and eagerness to start a spinal cord injury unit in Stockholm. Unfortunately, Sweden’s bureaucracy and lack of institutional power made it difficult to succeed the traditional way. Nevertheless, Claes and Richard did not give up. They received help from unexpected quarters.

In January 1989, Hans Norberg from Luleå broke his neck in an Allsvenskan league ice hockey match. His injury led to the idea of using the ice hockey World Championships as a platform to launch a Swedish sponsorship program for Spinalis.

Hans Norberg and Claes Hultling rolled out onto the ice in the crowded Globe Arena while 300 piggy banks were passed around. The Globe event brought in almost SEK 500,000.

This initial effort led to a unique sponsorship program – social sponsorship – which after one year generated an impressive SEK 5 million. It was enough to start the first specialized spinal cord injuru unit in Sweden.

With broad support from individual donors, funds and the business sector, the foundation has financed much of the spinal cord injury research conducted at Karolinska Institutet and the Spinalis SCI unit at Rehab station Stockholm. Our largest contributors have been Kinnevik, Astra and Skandia. We largely have these three companies to thank for our existence. We have a scientific cooperation with Coloplast AB in order to develop better products and services that make life easier for people with very personal and private medical conditions.

This website uses cookies to improve your experience while you navigate through the website. Out of these, the cookies that are categorized as necessary are stored on your browser as they are essential for the working of basic functionalities of the website. We also use third-party cookies that help us analyze and understand how you use this website. These cookies will be stored in your browser only with your consent. You also have the option to opt-out of these cookies. But opting out of some of these cookies may affect your browsing experience.
Necessary Always Enabled
Necessary cookies are absolutely essential for the website to function properly. This category only includes cookies that ensures basic functionalities and security features of the website. These cookies do not store any personal information.
Non-necessary
Any cookies that may not be particularly necessary for the website to function and is used specifically to collect user personal data via analytics, ads, other embedded contents are termed as non-necessary cookies. It is mandatory to procure user consent prior to running these cookies on your website.
SAVE & ACCEPT